How to track your clients by HUBZone area?

In this FAQ we will discuss the HUBZone field that is automatically updated and maintained by Neoserra. There is a secondary field titled: "HUBZone Certification Date" which is maintain by the user. Neoserra can updated the HUBZone field based upon the client's Latitudinal and Longitudinal coordinates which are automatically added to a client's record once an accurate street address has been entered. Before we discuss the HUBZone update process in Neoserra, it is important to understand how Neoserra determines a client's latitudinal and longitudinal coordinates.

We will discuss the Neoserra geo-locating process first, because an accurate address is essential for accurate HUBZone data. If an address cannot be properly located, then the HUBZone field will show 'Undefined'.

The street address information in your database is automatically matched to the correct latitudinal and longitudinal coordinates. Using the coordinates Neoserra can determine the census tract for the client. Addresses that include extraneous data, such as "Building X, Floor 99", or "Villa Tranquility" may not resolve to correct latitudinal and longitudinal coordinates, which, in turn, means that Neoserra will not be able to determine the correct census tract. In the absence of accurate census tract information, Neoserra will not be able to set the client's Opportunity Zone, Rural Location nor the HUBZone information.

If you do want to add additional information to the address, such as building name or suite number, then this information can be safely added after a comma on a second line in the Address field. For example, this is not a valid address:

And Neoserra will tell you that the level of accuracy for this address is only at the city level - not the street level:

But this is a valid address, with a comma after the street address and the additional information on a second line:

If Neoserra is not able to obtain exact latitudinal and longitudinal coordinates then it will resolve to the city level, and you may see multiple businesses "clustered" in the the center of the city, on the map, which, in turn, means that the census tract and HUBZone information are also not correct.

However, you can also enter in your own latitudinal and longitudinal coordinates, if you know them. On the address tab of the client record, you will notice a "Locate" link: 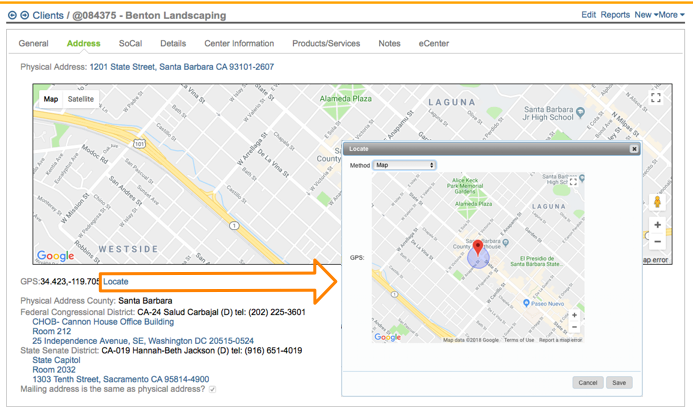 Using this interface, you can either:

The HUBZone program fuels small business growth in historically underutilized business zones with a goal of awarding at least three percent of federal contract dollars to HUBZone-certified companies each year. To qualify for the HUBZone program, a client must:

Neoserra will never know whether a client's employees live in a HUBZone, but Neoserra can determine if, as a minimum, whether the client itself is located in a HUBZone. This determination is made, as noted above, based upon the census tract where the client is located which is then matched against the HUBZone tables.

Neoserra has two fields to support the HUBZone information:

The HUBZone field itself will not be displayed on eCenter Direct since it is updated automatically, however, assuming you choose to display the HUBZone Certification Date on the eCenter registration form, then the client can manually indicate whether they have been HUBZone certified, or not.

It should be noted that a client, on eCenter Direct, can indicate that they are a certified HUBZone even if the address they entered is not located in a HUBZone. eCenter will allow the user to indicate certification, if they have it, because the certification could be for another address.

Finding all Clients in a HUBZone

You can search for all clients located in a HUBZone, or who have a HUBZone certification by using the "HUBZone" filter parameter: